A downloadable game for Windows, macOS, and Linux

Discover what lies outside your world!

A mermaid princess wonders about what lies in the great beyond.

Does she decide to go out there and see for herself? And who will she find helping her along the way?

The mysterious loner of a merman, or perhaps a reliable childhood friend?

A Visual Novel created for Ludum Dare 38, with the theme Small World. I love the characters! Very sweet.

I think.. The way I interpret the true ending is.. They're in an aquarium. That's why the Princess die when she made a crack and there were screams when it happened. the screams came from people. I don't believe that the ocean is that small and the did mention of human and land. Perhaps their ancestors were caught by humans to be put in aquarium and made up the legend for the people's sake. The ancestors obviously knew what was going on and that's how they knew of land and human who walked without tails. That is sad. Love the romantic endings tho

This is a unique and fresh intepretation of LD's theme. But seriously.... the seventh ending is the most difficult part because I don't get it till now although I have approached many differents type of choice and even draw a diagram of routes for it!! :'D

Nonetheless, wish for your next project or vn (^_^)/

Edit : A huge gratitude to the developers for the update ^^

How do you get anything past boy-boy love. It's an interesting game and I want to explore it more.

Reply
Pixels and Pins4 years ago

Do you have any problems or policies regarding Let's Plays? This one in particular would be part of a series, only feature the first 2-3 hours of one route, and link back here.

Nice game! I love the art and banter between MC and Triss is precious. But!(because there is always a "but") I have an issue with the maze and battle system: if you die and start a new game, you are back at 20 HP with means you die after one hit once more which is... well, a little annoying. Plus, have you considered making a walkthough(I know I'm repeating previous comment)? Cause I, for the love of God, can't get second and seventh ending.

I had that problem, but it gave me 0 hp after I died once. I decided to replay it to maybe fit that problem and it's at -20 hp

I also can't get the seventh ending... but for the second ending : it's in Triss' route, can be achieved when your choices leads your MC to have no romantic feeling for Triss, and you accidentaly or even purposefully don't finish/reach the end of the maze. Hopefully it helps :)

Um, I actually couldn't find second ending at first and saw your comment and did it, Then, i wondered  if we could do not finishing maze in calder's route with no romantic interest with calder so in the end, that was the seventh ending. Just saying since many couldnt get seventh ending.

Well, it's always a pleasure as a fellow gamer to help each other's problem regarding the vn ^^

As for the 7th ending, thanks for the guide! But, it seems there is a glitch for some versions, which seems to be the center of the problem (inability to unlock the ending) , and the developers had regarded it well here

It's fun so far, but I suck at mazes, so I don't see myself getting any endings aside from "Love Without Answers", lol. Nice job, and cute art.

A really enjoyable game! Lovely art, great writing, and something I will probably be replaying quite a bit :)

Very intriguing game, I must say!

The art is very pretty and I really love the overall mood. The story is interesting for a short like that, even though I figured out pretty quickly what was happening in that world of theirs.

I must mention there is an error on the ending page though, as the game registers only the last ending you got. If you get another one, the previous goes back to "locked", and well - it's a bit troublesome with keeping track of what you did (I'm playing the Windows version, if it can help you).

So far, I got three endings, but since I want to discuss them...

So, I got the boy's love ending (and it was so funny XD), and two of Calder's endings - I've reached the end of the maze, and did both choices at the end, one leading to the "true ending", and the other one to the "what people want" one.

And oh man, I don't know what do I think about the endings... Even though I figured out the thing about their world, the ending were so sad. Living in ignorance isn't good, but seeing the princess die for the truth was awful too.

Now, by no means I'm saying the endings are bad (as in poorly executed) - they really got me, to be honest! But I'm curious - is there a way to get a happier ending? Calder is so cute, and I'd love to get something more romantic with him. Well, I'm asking since the game's tags include "romance", so yeah. Since the game is short, I don't ask for any hints about how to get other endings - I only want to know if I can get a happier ending than them going on with their lives and that's it.

Anyway, in any case, thank you for this lovely little game! I won't forget that experience!

Thanks so much. You can indeed get romance endings for both of the guys - I'm just fixing a few errors now and with the new build everything should be peachy.

Thank you for letting me know! I'll retry when you upload the new version then!

Thanks for your patience. We think that we caught the bugs this time but let us know if there are any more!

Soo! I've got one of the romantic endings, and everything was fine on the ending page too!

And the ending was definitely cute as hell haha!

But I've seen another bug, that I believe wasn't there before, or maybe I didn't stumble upon it. First thing I've tried with the new version was to get defeated in the maze, just in case it leads to an ending. It didn't, so I've realoaded my game, but I was starting the next fight with -20HP. Because of that, even with healing, I was defeated on the next turn. So I've started a new game from the beginning, and I was starting with 0HP this time. I was able to continue anyway since after a few tries I've managed to heal and the princess dodged the hit, but well, something isn't right about that, obviously

EDIT: oh yeah, and I don't know if it's a bug, but I usually save at each choice to see the various ways it can unfold depending on my answer, and if I do it here, it takes me back not to the choice itself but to the beginning of the conversation. And if wanting to save at the last scene of the game, it still takes me waaay back to when they discovered the edge. It may be a design choice as I've seen that before, but it usually doesn't take you so much back, so I figured I'll point it out.

Wow. I have no idea what the issue with -20HP is! If anyone else gets the same issue, we'll look into it for sure.

Thanks for being so in depth. <3 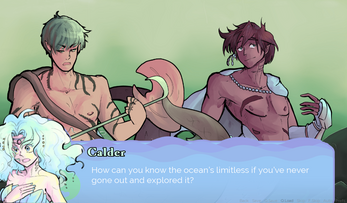 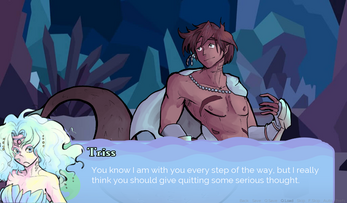 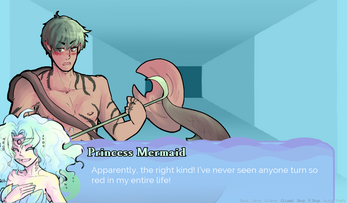